The Guns Of John Moses Browning

The remarkable story of the inventor whose firearms changed the world

“Beautifully crafted…Gorenstein brilliantly illuminates, so we mortals can understand, how great inventors think and work.” 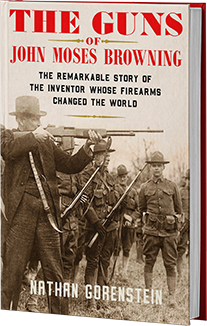 The first major biography of "the Thomas Edison of guns" 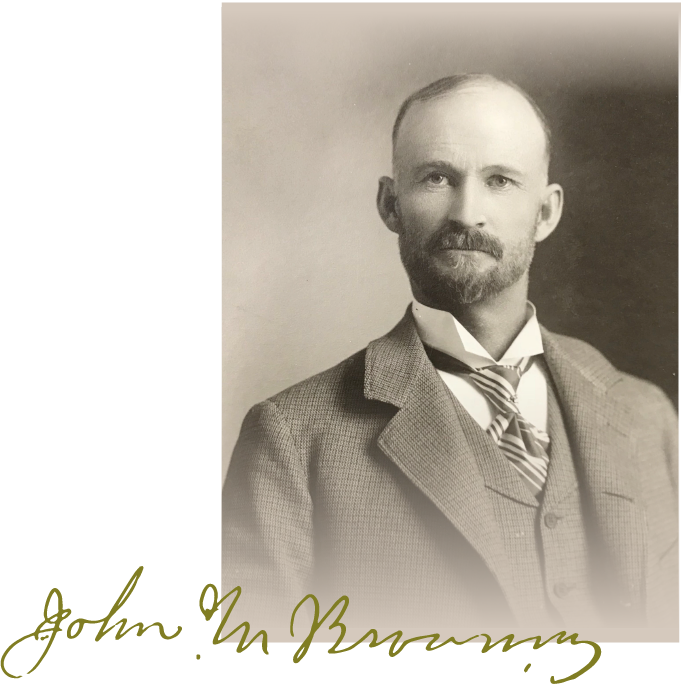 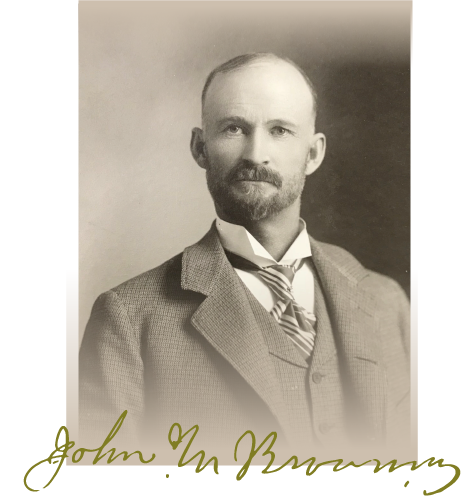 This first major biography of John Moses Browning, “the Thomas Edison of guns,” brings to life a visionary inventor whose astonishing array of firearms have shaped American culture and armed the world’s militaries for more than a century.

From his workbench in Utah, where he was born in 1855, Browning invented firearms that ranged from single-shot rifles to five-foot long aerial machine guns. He invented the modern semi-automatic pistol and the first successful pump-action shotgun. His lever-action rifles are legendary. Tens of millions of Browning firearms have been sold world-wide.

Browning died in 1926, yet his inventions from decades earlier proved decisive in World War II, starting at the Battle of Britain and ending with the defeat of Imperial Japan. Browning machine guns armed every American and British fighter plane and bomber.  American infantry units in Europe and the Pacific fought with his tripod-mounted machine gun, his Model 1911 pistol and the Browning Automatic Rifle. His firearms are still used in the 21st century.

Browning possessed a remarkable gift for thinking in three dimensions. He never used blueprints. While competitors in the 19th and  20th centuries struggled to create one or two successful firearms, Browning, assisted by brothers Matt and Ed, became the genius behind arms makers Winchester, Colt and Remington. Largely unknown in America until the last decade of his life, his work in Belgium had already made him a household name in Europe.

Browning’s story is the story of modern firearms, for good and ill.

Browning elk hunting circa 1910. He holds his semi-automatic rifle made by Remington
The first Browning handgun, created in 1894, was the forerunner of modern pistols.
Browning’s hand built .50 machine gun prototype. Much of the metal work was done by his brother, Jonathan “Ed” Browning.
The “4 B’s” trapshooting team. Browning, sitting in center, holds a shotgun design sold to Winchester. Brother and business partner Matthew S. Browning is at right.
Anne Louisa Ide Cockran, society lady and the well-known wife of a New York congressman, poses with A BAR at a 1918 patriotic rally outside the public library.
“Once just an obscure name, Browning…emerges as one of America’s greatest inventors. Thanks to Gorenstein’s marvelous detective work, he will finally take his rightful place alongside Edison, Ford, and the Wright Brothers in our national Hall of Fame.”
Alexander Rose
New York Times bestselling author of Washington’s Spies and American Rifle
“This vivid, meticulous biography is fascinating. John Browning invented the Winchester .30-.30…pump action shotgun(s), the .45 pistol and the BAR… A remarkable and detailed story!"
Bing West
author of No True Glory, Call
“The furious complexity of the human species means that the word 'genius' can apply equally to the likes of Shakespeare, Einstein, Mozart -- and John Moses Browning… In this lucid, straightforward account of Browning's work and life, Nathan Gorenstein explores, in intricate and granular detail, the nature and implications of his achievement.”
Julia Keller
Pulitzer Prize-winning author of Mr. Gatling's Terrible Marvel: The Gun That Changed Everything and the Misunderstood Genius Who Invented It
“The perfect combination of technological and social history—a feat rarely attempted and even more rarely achieved…Crucially, Gorenstein examines Browning’s revolutionary inventions through the lens of John Moses the man, revealing how one brilliant mind can change the course of history—for better or worse.”
Ashley Hlebinsky
Founding President, Association of Firearms History and Museums
U.S. Marines on Bougainville during World War II. The pistols are Browning’s 1911, the weapon atop the turret is his .30 machine gun, and the M1 carbine has its roots in a prototype by John Moses Browning’s brother, Ed.
A Colt 1911 produced during World War I. 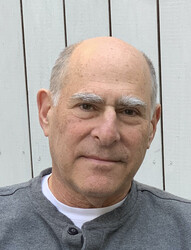 Nathan Gorenstein is a former reporter and editor for The Philadelphia Inquirer, where he covered city and state politics and produced a wealth of groundbreaking work. He was previously a reporter for the Wilmington News Journal, where he led coverage of Sen. Joseph Biden’s first presidential campaign. He is also the author of Tommy Gun Winter, the story of a Boston gang from the 1930s that included an MIT graduate, a minister’s daughter, and two of Gorenstein’s own relatives. He competes in handgun sports, sometimes with a Browning 1911 pistol.